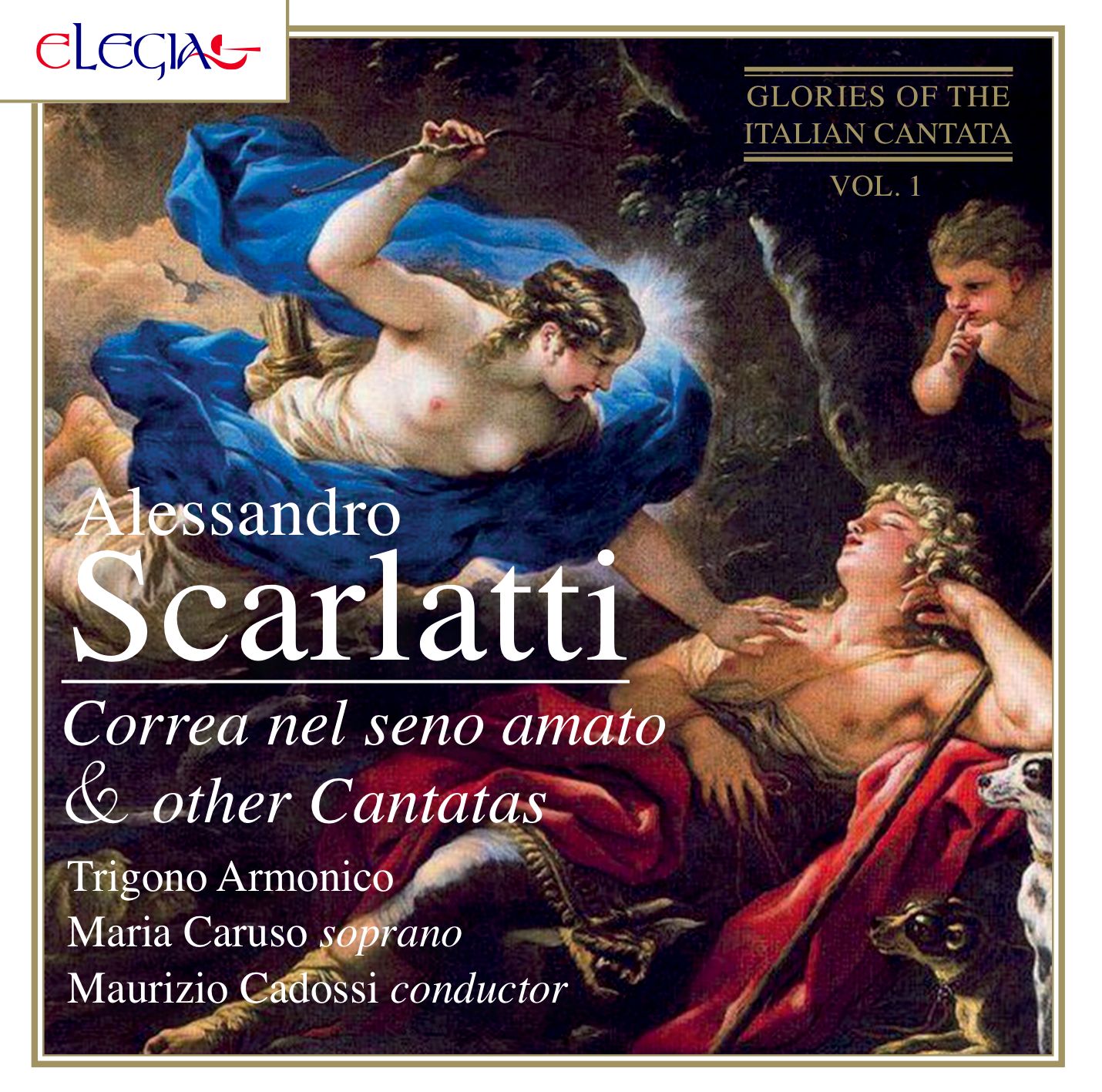 Born in Palermo in 1660, Alessandro Scarlatti led a very itinerant life. His activity as a musician, officially begun in 1679, and took him to the most important Italian cultural centres, including Rome, Naples, Florence and Venice. Traditionally the beginnings of his musical training dates back to the roman meeting of a twelve-year-old Scarlatti with Giacomo Carissimi, the undisputed father of the cantata genre, and from whom it acquired its final form, given by the alternation of the recitativo and arioso styles, the latter resulting in the Aria. The revolutionary contribution of Scarlatti («the greatest innovator of music»),was the introduction of the Aria col da capo, and the substantial number of pieces he composed (601 cantatas for voice and basso continuo, 70 for voice and instruments, 20 for voice duet). The four recorded cantatas, though separate, are subtly connected by the common thread of a “liturgia profana del dolore” (profane liturgy of sorrow), whether it be terror of abandonment or dismay with death. The complexity of human emotions is well rendered by the voce di mezzo, which the composer wants in constant sprezzatura (disdainful quality or attitude), and in which the intensity has both a virile dramatic character and a feminine dark sorrow of despair. Amongst the interpretative facets required of the performers there is a marked theatricality, a longing for starry skies, the presence of a profane paradise. Correa nel sen amato, Scarlatti’s masterpiece, is characterized by the contrast between the lucid and tight use of counterpoint in the recitativi, and the apparent musical simplicity of the Arias. Each of them corresponds to one of the “four moods” connected with Hippocrates’ theory of the four personality types: melancholic, sanguine, choleric, phlegmatic. The expressiveness required by the text, reflected in the changes in mood of the narrator and the drama of Daliso and Curilla, becomes music through a disciplined ornamentation which is never exasperated; breaths and inflections are the same as for spoken language, a stylistic feature of the nascent Neapolitan School of which Scarlatti was the greatest representative. The following cantata Appena chiudo gli occhi, where sleep, enemy and deceiver, shows the beloved the unattainable image of Philenus, causes contrasting inner feelings and leads her to assert «[…] stringo mentre l’abbraccio il mio tormento» (I tighten though my embrace is my torment). Scarlatti makes skillful use of harmony in the two refined recitativi that introduce formal and measured arias: the harmonic instability is a representation of the sleep-wake, a place where reality and fiction are superimposed. Here the violin is the brilliant protagonist, together with the voice, in illustrating the trap hidden behind the slumber. Benché o sirena bella, characterized by subtle eroticism, is in its conciseness rich in ideas. On the one hand we see the level of love contained within the symbols: the singer torments himself for the beauty of the siren, describing a refined and sophisticated pleasure. On another level we meet a terrifying Natura, the monstrous but seductive mythological animal. The game between real and unreal reappears and leads to an illusional and unstable equilibrium. The Aria «Ferma, ferma!» (Cease, Cease!) sees, with marked rhetorical gimmickry, a solo voice in several passages without instrumental accompaniment overflowing with pathos and embellished by the dialogue as the cantata ends. Dove fuggo, a che penso, closes the liturgy of pain with a superimposed image of the protagonist on that of Mary Magdalene in the painted iconograph of that time. The sense of resigned piety and abandonment of Clori in a Natura populated by monsters is marked by the wide and desperate gesture of the violin, on a par with the voice at the narrative level, which closes with refrains two of the Arias. Once the words have finished there is a reinforcement of silent meditation and textual signification. The organ is the instrument utilized for the continuo so as to imply a sacredness with moralizing accents. The central part of the last aria of the cantata, «Passaggiero, impara, impara!» (Wayfarer, learn, learn!), appears to be musically ironic with respect to the text, to remind the listener that, after all, we are in front of a sublime illusion.
Creusa Suardi